A Fête-Dieu Procession in Paris: Now and Then 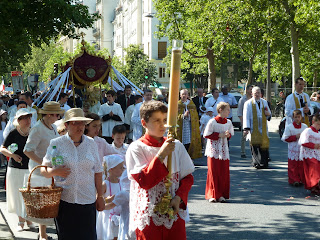 This is a photo from a Fête-Dieu procession that I took when I was in Paris in June this year. As part of my research on eighteenth-century religious art in Parisian parishes, I’ve been looking into the history of these processions during the early modern period and so was keen to get some sense of the experience even at this historical remove. The traditionalist parish of Saint-Nicolas-du-Chardonnet is now one of the only parishes left in the city that still performs the ritual.

Fête-Dieu (or Corpus Christi) is a moveable feast of the Roman Catholic Church (and some other Christian churches) celebrated annually in the week after Trinity Sunday (usually falling in May or June). The feast originated as a practice in the thirteenth century, and liturgically it commemorates the ritual of the Eucharist.

By the eighteenth-century, however, the feast day was not only theologically significant, but had also become a key community event in the urban calendar. One of the key rituals associated with the feast is the procession in which the consecrated Host is carried out of the church and into the streets of the parish so that all the community could witness and celebrate the Body of Christ. Each parish had its own procession in which the clergy and congregation would walk through and around the parish, marking its boundaries, and thus celebrating (or at least demarcating) the spaces encompassed by the local community.

Fête-Dieu holds significance for art historians of eighteenth-century France because of the material and visual impact of these processions. During this feast, the church was, to a certain extent, turned inside out, as the streets were decorated with banners and paintings to honour the passing Host. Moreover, until the Académie’s Salon exhibitions were inaugurated in 1737, Fête-Dieu was also the occasion for the city’s only public art exhibition at Place Dauphine, an annual display where artists exhibited their works outside in the square (seen here on Turgot’s map at the end of what is now the Île de la Cité).

As I said at the start, Saint-Nicolas-du-Chardonnet is now the only parish in Paris that still celebrates the feast. I was expecting the route of the procession to mark out the parish boundaries as it did in the eighteenth century, but it seems the procession is no longer a strictly local event. As you can see from the route that I mapped as we walked (left), the Saint-Nicolas-du-Chardonnet procession is far from confined to the 5th arrondissement. It begins at the church, but then makes its way to the Seine, crossing onto the Île de la Cité and then onto the Right Bank. Proceeding along the Quai de l’Hôtel de Ville, it then crosses back onto the Île Saint Louis, stopping briefly at a temporary altar on the Pont de la Tournelle where the host is elevated (with the Cathedral of Notre-Dame as a backdrop – as you can see in the photo below), before the procession moves back into the 5th arrondissement and returns to the church. With hundreds of participants walking and chanting, while altar boys swing incense from thuribles, and little children sprinkle flower petals, the procession, not surprisingly, causes a significant interruption to city life. Stopping traffic as it moves along occupying the full width of streets (for nearly two hours in total), the whole event is controlled by the police with patrol cars and metal barricades strategically placed along the route.

It was fascinating to witness how this medieval ritual has survived and yet how much it has clearly evolved, not just since the Middle Ages, but since the eighteenth-century… from a local community event in which neighbourhoods came together to celebrate… to a city-wide proclamation of traditionalist Roman Catholic belief which most Parisians now seem to greet with impatience.