Art and Sociability in the Eighteenth Century 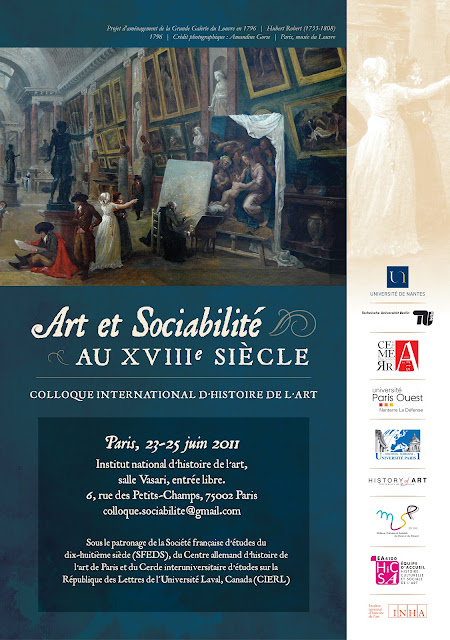 At the moment I’m writing a paper for this colloque happening in Paris at the INHA on 23-25 June. The organisers have brought together a really exciting looking programme of speakers from France, the USA, Germany and the UK to discuss ideas in response to the following call:

“Over the past two decades, sociabilité has become a useful and hotly debated concept for discussing the social, political and cultural changes during the eighteenth century. The works of Daniel Roche, Dena Goodman, Daniel Gordon, Antoine Lilti, and others have demonstrated that sociabilité can be fruitfully approached from the perspectives of sociology, philosophy and anthropology. In the eighteenth century, the Encyclopédie defined the term as “This inclination we have to do to others all the good that we can, to reconcile our happiness with that of others, and always to subordinate our personal advantage to the overall and communal advantage” (Louis de Jaucourt, 1751-1765) – that is, it was an abstract concept that explained the desire humankind had to participate in society.  At the time, it was intricately linked to the social practice of commerce, broadly defined as any reciprocal communication or exchange. The emerging public sphere of the period, constituted by spaces such as academies, literary salons, and Masonic lodges, was the stage on which such exchanges were enacted.

Since the publication of Thomas Crow’s Painters and Public Life in Eighteenth-Century Paris, art historians have taken an interest in the role of artists in the public sphere. These studies tend to take a monographic approach that is more interested in reconstructing the history of an individual artist, salonnière, or collector rather than the role that artworks played in larger systems of practice and exchange. This symposium will examine sociabilité in the eighteenth-century art world through the theme of social practice. By investigating the social practices of artists, amateurs, critics, salonniers and others we seek to uncover the larger networks of social exchange created by the commerce of material objects through collection practices, the art market and the display of art, and by the commerce of ideas through writing and conversation. To what extent did social practices in the public sphere influence artistic production and the material, economic, and verbal exchanges that took place around that production?”

The full programme of sessions is available on the conference website.