As part of my research on 18th-century French religious art, I’ve been doing significant archival work on artists and parish life in Paris. A large part of this involves finding ways of reconstructing local artistic communities, and a large part of that is mapping.

I’ve been using Google maps, for instance, to map the locations of parish churches and artists’ addresses and other key sites to get a sense of how people inhabited the early modern city. I’ve been building up a rich picture of the demographies and geographies of 18th-century artistic communities in Paris, mapping where these communities were concentrated, and tracing artists’ social networks at the local ‘neighbourhood’ level. (I’m going to be presenting some of this material next week in Paris at the Art & Sociability conference that I mentioned in my last post).

What I kept finding myself wanting, however, was a ‘historical’ Google maps.

For an intimate sense of early modern Paris, my favourite map is the Plan de Turgot. It was commissioned by Michel-Étienne Turgot (prévôt des marchands de Paris) in 1734, and completed by Louis Bretez (architect and master of perspective) in 1739. Bretez and his team of map makers went all over the city, into private courtyards and gardens, drawing pictures and taking measurements, to produce a map in isometric perspective with incredible detail of individual streets and residences. All the sections of the map have been digitised by the University of Kyoto and are available online.

But the urban structure of Paris changed considerably in the 19th century. Baron Haussman’s renovation of the streets of Paris in the 1850s and 1860s dramatically altered the fabric of the city, razing buildings and entire streets to make way for his network of boulevards. For an 18th century-ist, sometimes it’s difficult to imagine what the city was like a hundred years earlier. Before the Louvre had its large symmetrical wings, for example, the area around the palace was made up of little residential streets with shops and churches, and before the quays of Paris became roads, they were functioning ports.

I’ve spent many hours in Paris wandering around streets with printed bits of Turgot’s map trying to work out where things were… fun but not very effective. It gave me a great sense of the early modern city, but apart from lots of coloured annotations on bits of paper, no way of visualising it.

Bridging that disconnect between the 18th century and today – between Turgot’s Paris and Google’s Paris – became a lot easier a few months ago when Mia Ridge drew my attention to some fantastic sites which I’ve found both useful (as research tools) and inspiring (as visualisations of urban history research).

One was Georeferencer – a georeferencing tool that is solving exactly that disconnect by allowing the comparison of old maps with modern. Using three or more geographic reference points that haven’t changed between the 18th century and today, I was able to overlay Turgot’s 1739 map and Google maps and ended up with this. Now I could work out much more quickly where certain 18th-century streets were in relation to modern streets, and how and where the city has changed most significantly.

Another fantastic site was Hypercities, where all this overlaying is already done for you using historical maps in excellent resolution. They have maps for many cities all over the world, including Berlin, Lima, London, New York, Saigon, Tehran, Tel Aviv and Tokyo. Beyond the extensive geographic coverage, there are two things that make Hypercities so useful. First is the historical coverage: each city has several maps (for Paris there are maps from 1705, 1797, 1860, 1863, 1865, 1867, 1900, 1920) so you can get a sense of how the city is changing at different points, and when major expansions occur. Second, and probably most useful, is the opacity function, which allows you do make the historical map more or less transparent so that Googlemaps (or the satellite view) is easier to see underneath. As you move the opacity slider, it really feels like you’re zooming between two centuries.

And if you’re imagining how great it would be to have this on a mobile device with GPS, so you could wander quite literally through the streets of the past, then look no further than Look Back Maps, who have developed an iPhone app which locates historical data on contemporary maps (video demo). Another similar technological activation of historical geographies and archives is Philaplace, a local urban history project of Philadelphia using maps, photos and other data, which I’ve already blogged about here. 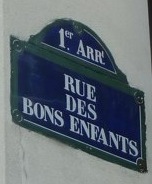